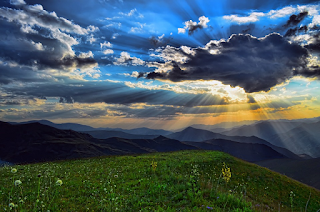 As usual, I couldn’t figure it out at first - what God was doing, I mean. I had planned a work schedule that would allow me to be off Good Friday through Easter. I did this very deliberately because I was determined that, this year, I would not, in my "busy-ness," charge past the significance of Easter. This year, I wanted to get it, to feel it deeply in my bones.

Oh, I know what Easter is all about, intellectually. But I really wanted to get beyond mere intellect this time. But, how do you actually get to the depth of something so huge and wonderful as the Resurrection.

In truth, I was not quite sure. But, I felt I could come closer to doing that if I was not distracted by work. So, I set the schedule accordingly and ask the Lord to help me work my plan.

I was to begin a light construction job on Wednesday before Easter which should be no problem to finish by Thursday afternoon. But things didn’t go quite according to that plan. It rained on Thursday - hard. So, scratch Thursday.

The sweet couple that I was working for were very easy going, but they were hoping to use their new screened in patio (the job) when their family came for Easter. And, I really hate to disappoint people. So, the job spilled into Friday - Good Friday. But, what’s a boy to do.

I worked very hard on Friday to finish up. But there were delays and owner changes. So, the job got a little bigger, and impossible to complete on Friday. Thus, it now slipped over into Saturday.

Saturday was the "Middle Day." It was the one full day that the Savior lay in that dark tomb. As I worked, I pondered from time to time on Saturday, in the precious little time I had to think about it, what was the Savior going through on that Middle Day?

What was the Heavenly Father feeling? Surely there was some vast wave of divine fury reverberating through the universe as the Son of God lay dead at the hands of God’s most ungrateful creature.

Or, perhaps not. Maybe I was just feeling the fury of my own frustration, as my job dragged on and the deeper experience of Easter slipped farther away.

I prayed all day for "God speed." I wanted to do a good job and serve the interest of the couple for whom I was working. But, I also wanted desperately to just be finished. And the more I wanted it, the less it happened.

Finally, after eleven long, emotionally wrenching hours on Saturday, I threw in the towel on my "deeper experience" plan. The patio was enclosed and very usable by the family, but the final touch-up painting would have to be completed on Monday.

At that point, I had neither the physical energy, nor the daylight to finish the job that evening. So, I picked up my tools and left, exhausted, and frustrated, and thinking "the Devil sure won this one."

As I drove home, a deep sense of sadness settled over me, partly because I really, really, really don’t like it when the Devil wins. But mostly, it was because I felt cheated out of something precious.

And then, there were the questions.  Why God didn’t do something? Why didn’t he help me? My cause seemed a good cause.

But, whatever was the answer to all of that, for the present, I was just too bone tired to pursue it. So, that was my state of body and mind as I went to bed on Saturday night.

And still, on Easter Sunday morning, I felt disappointed about what I was feeling - as opposed to what I wanted to be feeling. Safe to say, the week had beaten me up pretty good, emotionally and physically. And it was obvious on Sunday morning that I had not so quickly shaken it off.

So - I guess I really wasn’t, at this late hour in the Holy Week, expecting much of myself or for myself. And then I got to church...

The Pastor opened our service with a beautiful and moving song; and something began to happen. Then, our worship staff led us through the most beautiful Easter worship that I think I have ever been in. It was as though the music was fashioned in Heaven itself. Every song became so much more than just music.

It was not until later in the day on Sunday, as I pondered it all, that what God had done finally hit me.  I finally realized that He was simply adding in that indispensable element which made that first Resurrection Morning so completely spectacular.  And that ingredient is "Contrast."   To deeply experience the wondrous release of the Resurrection requires that it be juxtaposed against something of the exhaustion of human struggle - just as it was with Jesus on that first Easter Morning.

So, in His wisdom, God simply answered my prayers by making my work problems a small, but very fresh, taste of that bitterness which is so mingled into the human experience  And, He even aligned the calendar correctly, allowing my struggle to occur across Good  Friday, Saturday, and a bit of Sunday, just as in that first Easter.
So, God did exactly what I had asked Him to do,  just not in the way that I expected - wow, even better.  I was also elated to suddenly realize something else on Sunday afternoon. I realized that the Devil didn’t win, after all! YEAH!   So, again, just like the original Holy Week, it only seemed so at the first. YEAH! and DOUBLE YEAH!  PRAISE THE LORD!  HE IS RISEN, INDEED.
Posted by Larry Burnett at 7:30 PM