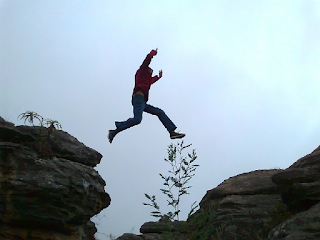 When I was a little boy (about 10) I was livin' large. My grandparents had a mom and pop type grocery store just at the edge of the neighborhood in which I lived. It was about a 15 minute trip on my bicycle (if you pedaled hard, and I always did) to be pulling up to the front of that wonderful old building.

That store was a place of pure joy for me. It was full of candy, and cokes, and ice cream, and two of the people I loved most in the world. Needless to say, I spent a lot of time there.

And one of the best things about that store was that it stood right at the edge of "Fishing Utopia." Just 300 yards behind the store, in a wooded area, was a beautiful little 2 acre lake that held endless possibilities for an 11 year old boy.

You could, on that lake, on any given day, be a pirate, build a log "boat" (or at least make a good start and dream the rest), find turtles, check on duck eggs, catch 100 sun perch, or do endless other adventurous things. It was truly a place of wonder, of a thousand wonders.

But, it was very difficult to get to. Oh, it was easy enough geographically. If I ran full speed from the store (and I always did) I could be there in mere seconds. That part was easy. The hard part was convincing my grandmother that I could be trusted to go there.

The process usually involved begging, and more begging, and then begging some more. And eventually, on most days I would finally gain her permission.

But even then, it was only after she read me an interminable list of dangerous things that I absolutely could not do. And only after I listened to an equally long list of things she would do to me, if I did.

Obviously, she had me "over a barrel." So, I would agree to all of her terms; and finally, I would be off. You can't imagine the joy of that short journey.

There was one feature of the lake that completely fascinated me. The lake had an island! There was a long finger of land that jutted out into the lake and at the end of that finger (I'd say about 10 feet or so beyond its end) there it was - THE ISLAND - the absolute center of the fishing universe.

The island was also a long finger of land.  But, alas, there was this vast stretch of water (about 10 feet you remember) between me and that "Fishing Heaven."

Week after week, that stretch of water kept me from my dream. Every fisherman knew that you had to fish from the island to catch the really good fish. And so I eyed that island jealously, until one day I knew - I had to try...

I walked out to the end of that long peninsula that was to be my runway.  I turned the big end of my fishing pole around and launched it like a spear toward the island. It landed well safe on the other side.

Now once a guy's fishing pole is on the other side, what else can he do. He is pretty much committed at that point. Then, for good measure, I flung my cricket holder over, as well.

Then, I walked back up the trail in the center of the peninsula to a point that I thought would allow me to achieve "terminal velocity." I paused for a moment to focus. I gritted my teeth together (always good for an extra few inches of distance). I picked out my landing spot. And I took off!

I did my best to run a hole in the wind.  And, when I got to the end of the peninsula I jumped. I jumped as hard as I ever had, as hard as I possibly could.

I don't think my legs ever stopped running for the entire flight. And what a flight it was. It was high and thrilling; and the last part of it seemed to be in slow motion.

"Did I make it?" you ask. You better believe I did. I landed square on the dry shores of a dream come true. The island was mine!!! And now, the fish were bigger, the world was smaller, and I was about 10 feet tall. I will never forget the day when I decided to make that leap.

I'm sure you understand why I never saw the need to burden my grandmother with the tedious details of that day. Discretion just seemed the better course. But boy, it was a red letter day for sure. I tested myself against the unknown - and I won.

I still occasionally recount that day in my mind with some joy.  And once, when I was doing so, the Holy Spirit whispered this idea in connection with that memory. "You make the leap and let Me take care of the landing." And so, as an additional benefit of that fond memory, I was challenged to explore the idea of godly risk.

Faith is the enabling currency of the spiritual life. But certainly, faith expresses itself very validly in different ways. And I would be the first to say that faith is not always blind. Nor is it always risky.

But - sometimes faith is, indeed, risky. And, in fact, those are the times, the risky times, that really define us spiritually.

The prevalent "easy believism" of our times would teach us to live comfortably within our own self-defined limitations. It would teach us to minimize the risk of God's will by mostly ignoring the seductive song of His inner challenges to us. But, in reality, that approach won't even get you to "Fishing Heaven," much less to the real one.
Posted by Larry Burnett at 11:51 AM