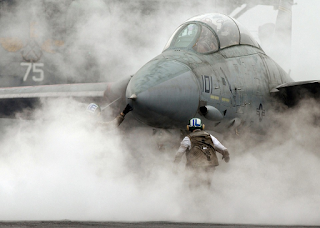 His name is Calvin.  He's my friend. A few days ago, I visited him once again.

Calvin, who is 81, is an "ole" retired Navy guy. He enlisted in 1949 and retired in 1969. Each time I visit Calvin, we eventually get around to the point where he tells me the same story of an event that occurred near the middle of those years.

The story goes like this. Calvin was assigned along with several other men to the engine room of his ship. On one fateful day, when he was on duty, a fire broke out in that engine room.

There were eight men in that compartment at the time. Immediately, four of the men were sent out for their own safety, not being necessary to fight the fire. Calvin was among those who were told to leave, but he refused to go. So, he stayed behind with his shipmates to fight the fire.

It was a horrendous fire that eventually engulfed the entire compartment. There were later indications that the temp reached almost 1000 degrees in some places.

Eventually, as a last option to contain the fire and save the ship, the engine room was ordered sealed with the firefighters still inside. Calvin said he eventually just slipped into unconsciousness, relating that the last thing he remembered was the thick black smoke descending down on him.

When the fire was finally out, only Calvin and one other shipmate were left alive in the engine compartment. His shipmate died of his burns 4 days later.  So, ultimately Calvin came to be the only survivor.

Every time Calvin tells the story, tears come to his eyes. I know that the majority of those tears are for the perfect sacrifice that his shipmates made that day. Even across all of these years, that sacrifice speaks deeply to Calvin, as it does to us all.

And, how could we not cry for the loss of those heroic lives. But, I think some of Calvin’s tears stem from something else.

Each time I watch Calvin telling the story, it is so very easy to sense those fallen comrades calling to him. But, they call to him, not just to appreciate their sacrifice, but they also call to him to discover his own best self, to rise to their level of nobility.

And, Calvin's poignant tears are the way he acknowledges that high challenge.  They are his humble affirmation that he sees the nobility of what they did and feels obligated by their example.

But, what is it, precisely, which draws these very deep emotions from most all of us when we observe or remember such heroism? I think it is the sheer beauty of selflessness.

So, when we see a defender of the defenseless, we're moved by that selfless intervention.  When we observe someone step between an irate boss and a brow beaten employee their action calls to our highest ideals.  When we see our soldiers, law enforcement, or firefighters step up to form the outer ring of our defense - some part of us aspires to know that selflessness within ourselves.

Thus, in the final analysis, the tears we cry over our heroes are not just tears of appreciation. They are also tears of aspiration.

And, they are also evidence.  They confirm that, still lingering deeply in the psyche of humanity, there remains that noble motive instilled so long ago by our Creator when He said, "Be ye holy, for I am holy.

Thus, when our heroes inspire us, those Godly rhythms come irresistibly to the surface of our consciousness. And, for a time, they insist that we search for some answering nobility within ourselves.
Posted by Larry Burnett at 12:15 PM