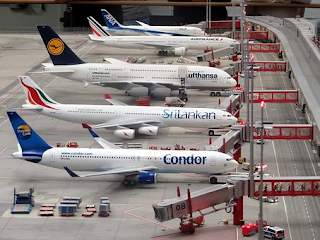 But, the plane was leaving very early in the morning on the travel day. Time to make a reservation at a hotel near the airport for the night before.

This was so I could drop off the car at DFW Airport the night before the flight, catch the hotel's airport shuttle back to the hotel for the night, order a delivery pizza for dinner, sleep a few hours, get up at 4:30, take the shuttle back to the airport, and catch the plane to Florida. We won't talk about airport security that day (it was only a hunting knife - just kidding).

A week later, when the visit was over, time to catch a plane in Tampa to come back home. Once in Dallas, time to rent another car for the trip back to Texarkana.

My arrival in Dallas was at a weary, eyes-beginning-to-burn and droop, 10:30 PM. The Avis clerk took one look at me and said, "Time for a free upgrade." For that timely kindness, I have been a loyal Avis customer ever since.

Eventually, "three hours eventually," I arrived at my own door. Time to go to bed. I love my bed.

As complicated as all of this may sound, that was still the simplified version. For a country boy this was all a very harrowing process.

I rented the first car on Saturday near noon when the rental car people (not Avis) were way more worried about getting off on time (straight up noon was quitting time) than actually renting me a car.

Dropping off the car in that city that Dallas calls an airport, you start to wonder if there really is a rental car area.  And, if there is, how in the world do you get to it.

When I did find it, there were literally acres of cars belonging to multitudes of rental companies. And unintelligible signage was everywhere - all designed (I know) to confuse country boys.

But eventually, after working my way through this cast iron jungle - with very courteous attendants I might add - it was time to go sit at the hotel shuttle stop.

As the sun started to set and darkness started to creep in, I suddenly became very keenly aware that I was no longer in the "Kansas" of my familiar hometown.  And so, I started to wonder. "Is that shuttle really going to show up? Am I too late to catch it? I wonder if this is the right bench for the right shuttle for the right hotel."  Then, "Ah, wait! There it comes. Shooo."

Manageable. It's a nice word, and a nice condition in life. We like life to be very manageable. In fact most of us work hard at keeping it that way.

We don't like to be in an uncertain or uncontrolled or unfamiliar (all just other ways of saying "unmanageable") circumstance. But, in fact, there are times when unmanageable is preferred - not usually by us "country boys and girls" - but by the God who created us. This is true because "Manageable" is often the bane of a strong faith.

If we insist that our faith always be manageable, in the sense that its demands must be easy to meet and fit comfortably into our schedule, our priorities, our plans, and our budget, etc. - then we must also make ourselves comfortable with spiritual anemia - at best. Because that is exactly what an always manageable faith always produces.

On the other hand, a not so easily managed faith - a faith that places significant demands on our intellect, our will, our resources, and our personal plans - that faith stretches us, strengthens us, and matures us. That faith authenticates us, and takes us to the depths of relationship with God.

On that trip to Florida, I was way out of my easily manageable element. At every new juncture there was uncertainty, misgivings, emotional discomfort, and even, at times, PANIC. But, here is what I found the solution to be: "Surrender to the journey."

So, I did. I simply gave myself to the process of getting to Florida, whatever that journey entailed. And after that, it was easy. It simply became a matter of simply continuing to put one foot in front of the other, so to speak and allowing those steps to take me past each problem.

The same approach works for a demanding faith. By its very nature faith often leads us into circumstances that don't fit into our "druthers." It is suppose to do that. God often calls to us, sometimes very insistently, to enter into a reality that we cannot control, that is uncertain, that is unfamiliar, and that doesn't fit our idea of manageable.

But those are the calls which most define a vital faith. The key is not to run from the challenges placed on us by a vibrant and growing faith.  Rather, the far better thing is to simply surrender ourselves to them.

If we would get to the place of God's intimate friendship, then the obvious course is to give yourself to the process which gets us there. And, once you truly embrace the reality of "unmanageable" in pursuit of that friendship, then, again,  it truly does becomes just a matter of one foot in front of the other.

God will draw on your faith. That is what He does. He will ask you to do some things that don't fit your parameters for manageability. Time to grow.

When God calls you to a purpose or a providence, just say "yes." And let Him bring you to a whole new awareness of what braving the unmanageable can do for you.
Posted by Larry Burnett at 7:59 AM