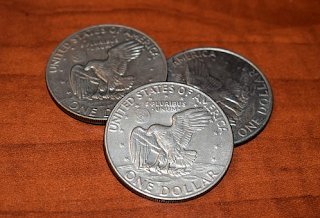 When I was a little boy, something happened to teach me of the ways of God. I have not forgotten the lesson to this day.

I was sitting in Sunday School in my ninth year of life. I'm sure I had been cutting up and generally making the teacher's life miserable, even though I loved Ms. Crawford dearly. Why do boys express their love as terrorism?

Anyway, Mrs. Crawford was trying to settle the class down and take up an offering. My mother had given me a quarter before class. So, I pulled it out to put it in the offering plate. And, I was just sitting there waiting for the plate to arrive so I could deposit it.

Then, I heard Him say something in that voice of unspoken word. Kids have an easy awareness of God. Innocence (if not good behavior) seems to afford children simpler access. But on this morning, I could hardly believe what I was sensing.

"I want the dollar" was my very distinct heart impression.  I don't know how, but I knew God meant the silver dollar in my jeans pocket.

My Grandfather had given me that dollar; and, I was never without it. It was very special to me. I carried it everywhere.

I was very surprised at the tender age of nine, as you might expect, that God would ask for my chief treasure in the whole world. But after a brief pause, I knew what I had to do. So, I put both the dollar and the quarter in the offering plate as it went by.

I did not hear the Sunday School lesson that morning (which was not really that unusual). I was completely preoccupied with what had happened.

As I remember, there were a lot of swirling question marks: "Why did God do that? Why today? Was it really God or just me? Why did he ask for the dollar? Did I do something wrong?  Did I do the right thing?"

Then it was time for church. But I didn't hear the sermon either (you guessed it, again, not that unusual). But, this time, I was still just trying to figure out the events of the Sunday School hour.

I heard Mom and Dad speaking softly between themselves about something in the front seat.  But, I didn't pay much attention (ok, ok).

But, this time it was with good reason.  Some portion of my sister's dress had protruded over the sovereign international border that bisected the back seat between "her side" and "my side."

So, a full blown diplomatic incident was in progress. No border trespass was ever allowed to go unaddressed. Thus, my sister and I were preoccupied with a serious territorial war of words.

The war was cut short, however, when my Dad raised his voice to ask me a completely unexpected question. He said, "Larry, can I see your silver dollar?"

The border skirmish instantly ceased, as did all sound from the back seat. I had no idea what to say. I didn't know if I was in trouble - or what. But I was very aware that, all of a sudden, that silver dollar had surely become important to a lot of people.

After a short silence, Dad said, "Son, have you got your dollar with you?" Again, silence.

After another short pause, I finally told my Dad the whole story. Just as I finished my story about what had happened to the dollar, my Dad's big leathery hand came slipping over the back of the front seat. He turned it over and opened it. And there, in the palm of his hand, was my silver dollar. He said, "Here son. I bought it back for you."

My Dad was the Sunday School Superintendent at our church. And, when he was counting the offering, he saw the dollar. Dad was always very intuitive; and, apparently he sensed something of what was going on. So he redeemed the dollar for me.

I spent the rest of the trip home listening to Dad reassure me through his own occasional tears that not only was I not in trouble, but that I had absolutely done the right thing. He confirmed, in no uncertain terms, that it is always right to give God your all, your most precious, your very best. And he made sure that I knew that if we can't do it in the real terms of "silver dollars," we are probably just kidding ourselves about doing it in the other areas of life.

Since that Sunday morning, I have had other similar encounters with God. They have been basically the same. They are encounters of consecration and faith.

As I think about it now though, it seems that as the years have passed, the decimal point involved in His requests may have moved steadily to the right. And the "cherish factor" has become even larger. And the faith requirement has become noticeably steeper. But ultimately, all of these encounters just come to this: His "How much?" question awaiting my "With all my heart" response.

I know that this is a lesson easily misapplied. Crazy people can use the "God told me to" thing to justify everything from jihad to doing harm to their children. But they are crazy. And crazy people do deranged stuff with or without a lesson.

Nevertheless, the Bible is replete with these consecrating encounters between God and His people. And their purpose is not to encourage extremism, but to confirm and enlarge our devotion.

The simple truth here? When God puts His finger on something and says, "Give me that," the real purpose is not to take something from us. It is to give something to us.

In these faith challenges, it's never really about the "silver dollars." God is merely setting the stage for us to experience the personal elevation which flows from such an act of faith when it is finished.

"...nor will I offer burnt offerings to the LORD my God with that which costs me nothing."  - King David.
Posted by Larry Burnett at 8:20 AM