The God In Your Ear 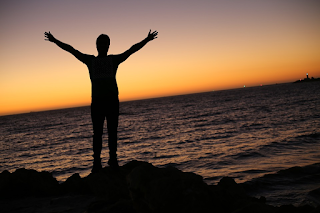 The letter was devastating. The short version: the monthly income from the sale of a company, which was enabling me to go to college full time in preparation for the ministry, would no longer be arriving in the mail. The new owner of the company had gone bankrupt after only about three years.

I was about to begin my final year of school and suddenly, without warning, the funding was gone. And beyond that, there was no immediate prospects for a job.

I ran to God, fell on my knees, and began to pray as, perhaps, never before. I prayed often, and long, and with a great deal of energy.

And, eventually, it began to seem that everything needed that same kind of prayer. Until, finally, it was as though I was never really out of the spirit of prayer. Always, at least on the “back burner” of my mind, I remained mentally and emotionally heightened toward God's presence and His "doings."

At first, admittedly, it was desperate, even panicked, prayers for the material help which we needed. But, gradually, it became something much more, something much better. Eventually, my desperation became anticipation, and then it morphed into what could only be described as an “addiction.”

It was an addiction to the higher level of divine interdiction upon the normal flow of life. As a result of these more desperate and thus more energized prayers, I discovered a God who was much more obviously engaged in the events of my days.

I now found myself also praying with a great many more people on all kinds of occasions. We prayed about everything from my good friend’s wayward brother to a fellow minister’s struggles at his church. I cried easily with people, as though their struggles were my own. I truly experienced a rich empathy for them. I felt God’s love literally filling me and changing my approach to others.

And again, beyond those heightened emotions and sensitivities, or perhaps through them, I began to see God moving and working in a much more visible way. For example, on one ordinary day, a friend and I were praying in an off hour between classes for an upcoming revival meeting where I was to be the evangelist. We had been doing so for some time in the empty sanctuary of the church near the school where we were both members.

When we finished, we got into my car, which was parked in the rear parking lot, and headed back to the school for our next class. As we rounded the corner of the building, I noticed a van parked in the wide driveway of the church. The logo on the side indicated that it was a cable service truck. And, I could see that this was a two man crew. They were laying a trunk cable across the church property.

Just as we passed the van, I heard the faint echoes of the divine whisper. It remains amazing to me how a voice so soft spoken, can sometimes be so insistent. The impression: “Speak to those men!”

So, first I tried to dismiss such an abrupt demand as religious insanity on my part. That argument had worked very effectively in the past. But, come to think of it, that was before this new prayer lifestyle thing had become so prevalent.

In any case, the insanity defense wasn’t working very well on this occasion. The divine impress remained insistent.

Once the insanity ploy failed, I started to argue a bit. The argument went something along the lines of, “A little help here, Lord? What do you want me to say to them?”

With that commanding tone, God began immediately to explain Himself – yeah, right. You guessed it. He merely continued to offer more of the same. So, by the end of the second minute of our drive back to school, I realized that I was going to be late for class this day.

I let my friend, Richard, out at the classroom building and asked him to let the instructor know that I was going to be a little late (they actually cared at my school). Then, I drove back to the church.  It was only two to three minutes away.

I pulled up directly behind the van. The two men were now eating their sack lunches. Both front doors were open on the van for ventilation. I walked up on the passenger side.

As I stepped into view, both heads shot around in my direction. I said, “Hey guys, I know this is going to sound crazy, but as I past you a few minutes ago, God impressed on me that I should speak to you. But, the problem is He didn’t tell me what to say.  So, I’m just trying to do what He impressed me to do."

There was a short, and very awkward, silence until the man on my side said this. “You don’t have to say any more, preacher, (I guess he just assumed I was a minister). God has been dealing with me for weeks about getting back into church. The man began to weep. And through those tears he choked out these final words, “I will be there Sunday.”

Needless to say, I was flabbergasted. To be part of such a powerful and obviously divine intervention in a man’s life was instantly humbling. And then the other man spoke up.

While his partner wiped his own tears, the other man said, “Sir, I have not been very religious in a very long time. And I can’t tell you that I am going to be in church on Sunday. But, I will tell you this. I am going to think about this long and hard. I didn’t know it worked this way.”

It was an amazing moment. I could not concentrate for thinking about it when I finally got to class. And there have, since, been many other such moments.

It's those times when God is not quite so insistent on remaining behind that veil of invisibility and intrigue. It’s those times when He just boldly steps into our situation in a remarkable and unmistakable way.

As I have looked at the phenomenon of these “God enriched moments,” for lack of a better term, I have realized something over the years. It is that life is supposed to be lived this way. It really is, as the Bible indicates, God’s every day intention to be, “Emanuel,” the God among us.

So, when and how has it become such an unusual thing for God to obviously insert Himself into our daily circumstances? Why isn’t there an “always obviousness” of God's presence in our days?

The answer to those question is completely uncomplicated. It is simply because we have made our prayer life to be more a matter of convenient moments, and appropriate occasions than a constant and vibrant connection to the heart of God.

Obviously, such an approach to prayer is much different than that of the fifteen minute morning “obligation.” It is also quite different from our ceremonial prayers. And, this energized and vibrant prayer life is certainly different from our quiet, head-in-hand prayer which allows for and even facilitates an occasional “drift off.”

Ceremonial prayers and casual and isolated moments of prayer will simply never do what this “day saturating” type prayer will do. So, how do we come by this unbroken connection? Well, it is pretty much exclusively the product of desperation.

It does not have to be financial desperation, as mine started out to be. It can be simply a desperation for His divine presence in you day and in your circumstance.  Or, it might be a desperation to defeat the darkness which hammers our world every day.

Or it might be a desperation to see good and great things accomplished. But, yeah, desperation is the first ingredient in this life altering form of prayer.

This is true because only some form of desperation will drive us beyond the convenient limits of our mind to establish and maintain this constant mental alliance with God. Only desperation will push us to go into seclusion with Him more often, and to stay longer.

Only desperation will cause us to make larger mental and emotional energy investments in our conversations with Him. And, only desperation will awaken the other emotions and sensitivities which enable us to weep, and laugh, and be angry and compassionate in perfect concert with the heart of God.

Life, and Satan, and the worldly norms are all dead set against this kind of prayer with its attendant impact to our reality. The Darkness always prefers that there be no more than isolated moments of anemic, rote prayers - at a maximum.

Nevertheless, we dare not acquiesce to those preferences. Prayer should never be relegated to be only about short and "appropriate" moments.

We of true faith must never settle for a distant God or a sedate spiritual status quo. We should live expectantly, anticipating that God will "show up" every day.

And it will happen if we retain the ancient key: broadly giving ourselves to His companionship. If you want to have God, you gotta' have "game."

If you really want to experience an exciting God that graces your day with extraordinary things, it’s always a matter of serious personal seclusion with Him. And for that great amount of time well spent, you can know the sweetest place in all the earth - that place where God "shows up."

“Pray without ceasing.” -Paul, the Apostle
Posted by Larry Burnett at 6:57 AM