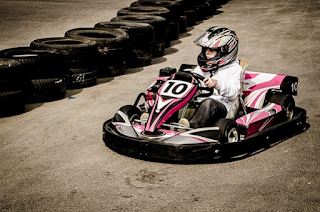 Andy, our youngest son, simply could not grow up fast enough. I think he never really understood that he was four years younger than his brother, Daniel. I believe he thought he was merely a little shorter.

So, in Andy's mind, he was supposed be able to do everything Daniel could do - and always have the privilege of trying. And, he pushed himself (and his mother and I) to make all of that happen as often as possible. And, after a while,  pushing himself  became a fairly noticeable tendency in Andy's life - sometimes working out OK and sometimes - not so much.

On one of those "I know I can do it" occasions, the family was in Hot Springs, Arkansas on a short holiday. We were actually headed home when the boys spotted a go-kart track. Both of them started in on me to stop (Andy the loudest, as usual), so, we did.

He was only about six years old at the time, so I said, “Ange, you and I will get a kart together, and I’ll help you drive it.” Yeah right.

The protest started immediately. Well, after I surveyed the very good rail/ bumper system at the track, I decided that it might be OK to let him learn a lesson here. So, I got the kart behind his to cover him from the rear in case there were speed demons etc. on the track.

As we made a few circles around the track, it was clear that Mr. White Knuckles was terrified. But he held it together until time was up.

When we pulled back into the parking area, I looked away from Andy for a minute as I was getting out of my kart. When I looked back, he was no where to be seen.

When I found him, he was sitting as close to his mother as he could possibly get. She had her arm around him, comforting him.  He was as white as a sheet and shaking like a leaf.

At this point my heart melted for him when I saw how really shaken he was.  I said, “Ange, are you OK?”

He said with no small amount of consternation and a little bit of a disappointed whimper in his little voice, “Dad, those things are dangerous!”

Now, I was feeling really sorry for him. So, in what turned out to be a badly misguided effort to reassure him, I said, “Well, Ange, I think their really pretty safe."

His big blue eyes flashed instantly up to meet mine.  Now, in those days, Andy was having a little trouble pronouncing his 'L's.  Nevertheless, he quickly fired back with the highest pitch of exasperation in his voice, “Daddy, are you crazy? Those things need ‘dua’ air bags.”

At that point, I couldn't possibly hold it in.  After a good long lol, entirely at Andy's expense, I sat down beside him and hugged him close. I told him that he did a really good job of driving, anyway.

After a while he did calmed down. And, the more we talked about the go-karts on the way home, the “cooler” the whole experience became. The last excited phrase I remember being impressed by before he went to sleep in the back seat between his older brother and his little sister was, “And next time...!”